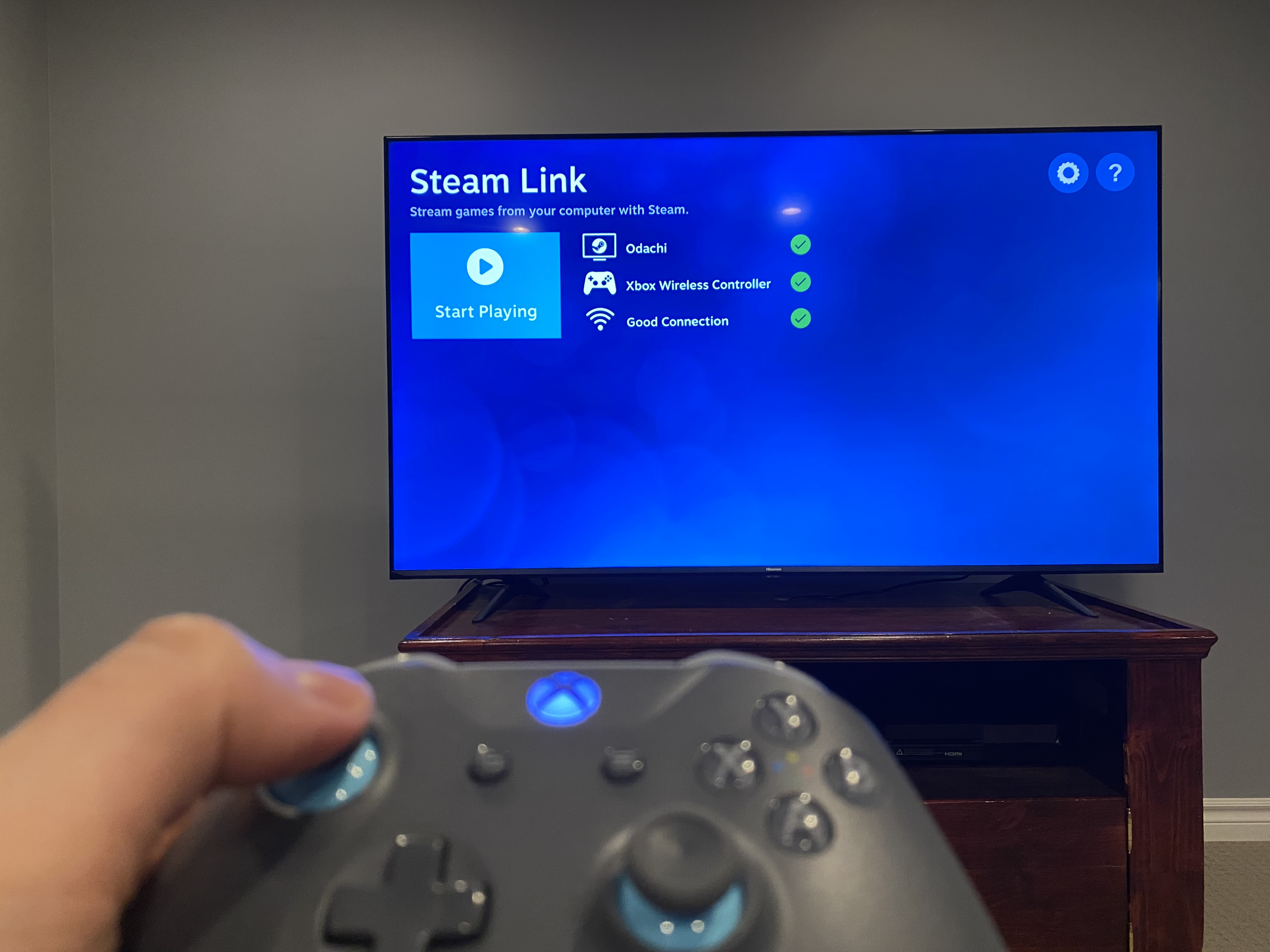 My Xbox Controller and a TV showing Steam Link (via Apple TV) ready for some Steam Remote Play.

I’m keeping this post fairly short due to the holiday season (I also just moved houses at the end of November, so it has been a bit hectic the last month). This post can be seen more as an informative tip for gamers who use Steam, which they might not know about.

If you do any form of PC gaming, you likely know about Steam. It’s a great service that has been around for a while. Fun fact – I found out that my Steam account is 17 years old! Steam has a wide selection of games, and over the years many new features have been added. I want to talk about one such feature – Steam Remote Play.

Steam Remote Play blew my mind when I first tried it out. It lets you stream a game from a system running Steam to a compatible client (e.g., an iPhone/iPad, Apple TV, etc.). The inputs and outputs work seamlessly and you are able to fully experience the game without being confined to where your gaming PC is located.

I personally use the Steam Link app on my iPhone and Apple TV. Apple’s ecosystem can use Bluetooth controllers (e.g., Xbox Controller) as an input, so this allows me to play games from a comfy couch like a console gamer. For those times that I need a keyboard or mouse, Steam Remote Play can also stream to another Steam Desktop client on my MacBook.

The following are a couple of tips that I’ve found useful during my time using Steam Remote Play.

The best thing you can do to improve your experience with Steam Remote Play is a strong LAN connection between the gaming PC and the clients you want to play on. A bad network connection increases input lag and graphical artifacts (pixelated look). It took a bit of work, but I was able to get a direct-wired ethernet connection from my router between my Apple TV and my gaming PC. The connection is such that I can’t tell whether I’m streaming or playing locally.

I didn’t want to keep my gaming PC on all the time from a power consumption perspective. I only use it when I want to play games, however, it resides in another room different from where I’m playing.

I take advantage of Wake-on-LAN in Windows. This allows the Steam Link app to send a wake-up packet when it tries to connect to the gaming PC, which powers on the PC for me on-demand. The finishing touch here is that I set a 10 minute sleep timer in Windows, which makes it so when you exit a game and stop streaming the PC will go to sleep.

I also found out you can add Non-Steam games, which still work via Steam Remote Play. This opens up a lot of opportunities as Steam is essentially opening/closing an executable. You could have games from another store (e.g., Epic Games), stand-alone games, or even ROMs if you are into that (via Steam ROM Manager).

The whole point of this setup is to increase comfort when playing games by not being tied to a desk (assuming the game can be played with a controller). Having a dedicated controller just lowers the friction of getting into a game. With my Apple TV setup, I just turn the Xbox Controller and Apple TV on, start up Steam Link and I’m playing within a minute or less.