Video Clubs: A Way to Keep Up 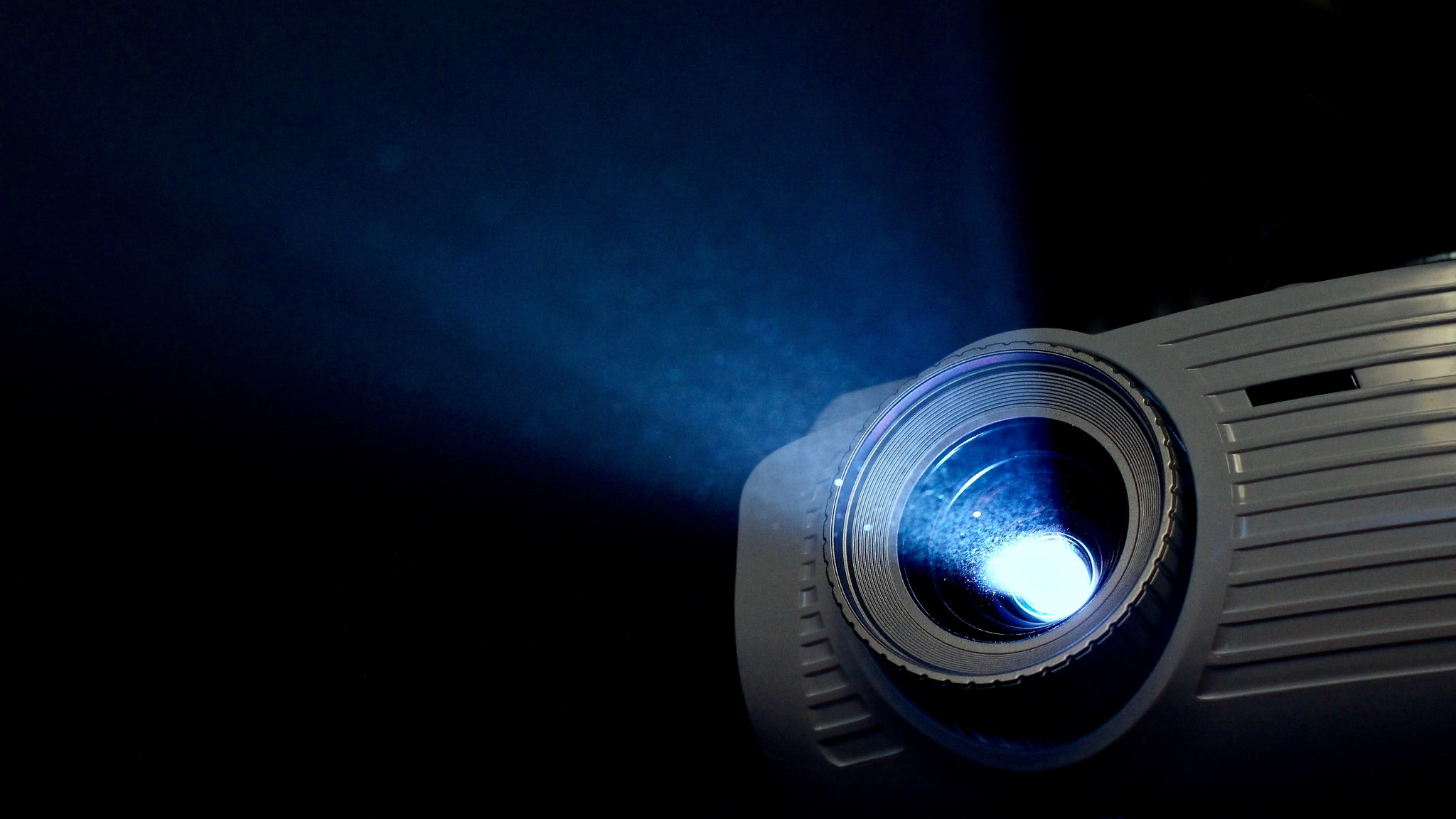 My domestic Laterna Magica, anno 2016 by Sita Jacobsen is licensed under CC BY-NC-ND

As a knowledge worker, a lot of our time is spent thinking about problems and solutions. We rely on pattern matching and experience while working to make the best progress we can. Is there a way to accelerate our learning and keep a pulse on new, upcoming, and innovative solutions? I will be approaching this question from a developer’s perspective, although the ideas presented here can be applied to other domains.

Being aware of best practices, new techniques, alternative frameworks, and really anything in general for your domain is good. I would attribute some of my successes to surface knowledge (i.e., having a high-level understanding), as it allows you to know of alternatives and possible solutions. Obviously, you would dive deeper into the area if you are going to invest more effort into it. In a way, this promotes a just-in-time learning philosophy, to focus on areas as needed. Again, the key is that you know of these areas.

Keeping up as Developers

I encourage developers to do the following, although from my experiences it’s common for developers to be doing at least some of these activities already:

I want to focus on the last point – watching conference videos. To me, this activity presents an affordable solution to attending conferences (from a time/money perspective). Additionally, conferences sometimes have multiple tracks and so, even as an attendee, it is not possible to see all the talks. The videos from a conference are usually available a few weeks after the conference. To me, conference talks represent distilled knowledge condensed into 30-60 minutes.

I would argue that it is a developer’s job to keep up with the community and to learn from industry-leaders. It can be hard to find the time to watch these videos on your own (i.e., evenings or weekends). Not only is the time a constraint, but also if you are consuming a conference video by yourself you are missing out on valuable discussions with peers immediately after the talk. So in an effort to better facilitate the time for learning, I am proposing the following: to start a video club at your workplace!

The Workings of a Video Club

At theScore, the way we’ve handled our video club has evolved over the years. Initially, the flow worked like so:

This flow worked and to be honest was fine. The main issue we wanted to fix was more transparency and organization around the videos. By addressing these concerns, the idea is that we’d be able to surface the most desired videos to be watched, as well as better facilitating discussion and recording findings.

The next section outlines how we’ve changed our video club to better work for developers, mainly taking advantage of GitHub and Slack. These changes have been well received, and it seems to better encourage the functioning aspects of the video club. I do want to mention that this next section is going to be highly tailored to developers.

We decided to move away from the wiki version of the video club to GitHub. The main reasons were:

The first thing we need is a repository video-club (or any other name you like). We only need two files in our repository: 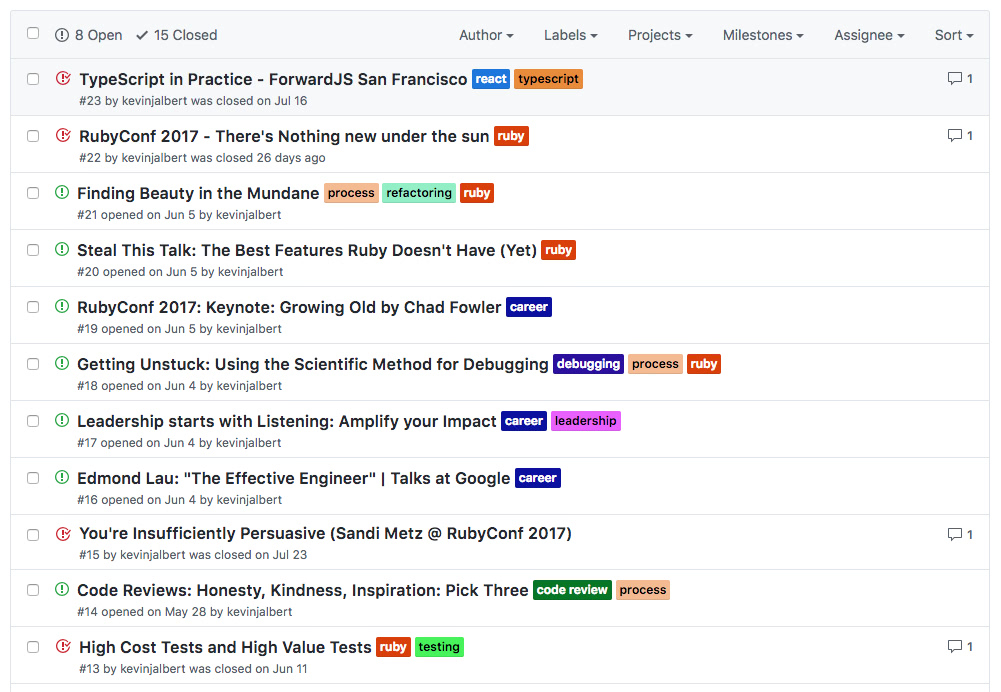 As you can see in the above image, each GitHub Issue represents a video within our repository. As we have an ISSUE_TEMPLATE.md each issue then follows a consistent format containing context and information about the video. Ideally, we want the inputting process for a video to be as low-friction as possible. Right now it is pretty quick to create a new issue for a video, although one thing I would like to do is create a bookmarklet or browser extension to pre-fill an issue based on the video URL. The following image illustrates an example video in our issue format. 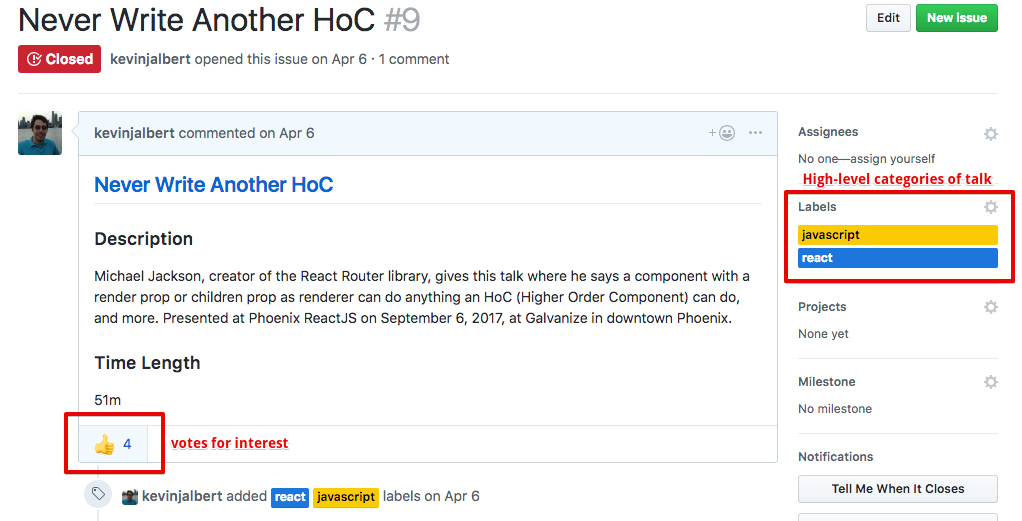 You can see that we take advantage of Issue Labels as well to further categorize the videos. We’re pretty loose with their usage, but it does provide additional context and filtering capabilities. One other aspect to notice is that we use Issue Reactions to vote on videos that a participant would like to watch at some point. These votes are then used to help pick the next video, as we will see in the next section.

Picking the Next Video

One of the main draws to using GitHub Issues is that we can vote using the reactions and then and sort the issues by votes (i.e., thumbsup reactions on the issue). This approach allows the participants to weigh in on what they would like to see. The end goal is that the most highly desired videos will be watched. By sorting the open issues by votes, the process of picking the next video is pretty straightforward. 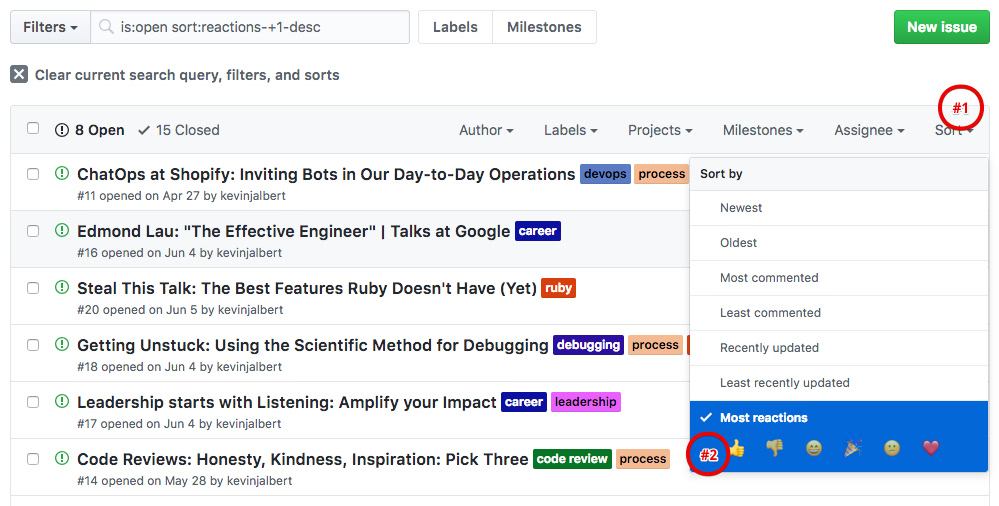 The fact that we have GitHub Issues gives us a space for discussion using GitHub Comments. After the video has been watched, we carry out a 5~ minute discussion and record the high-level takeaways. Our video club accommodates remote attendees (coordination is done via Slack), and in those situations, we use video conferencing to facilitate the discussion process.

Ideally, additional discussion can be carried out via more comments (even later after the video has been watched). We use GitHub for our projects, and having the videos as issues allows us to link to videos if we want to use them as references or talking points in other issues or pull requests. Finally, a video issue is closed after the initial discussion is written up for it. The following image demonstrates the aforementioned concepts. 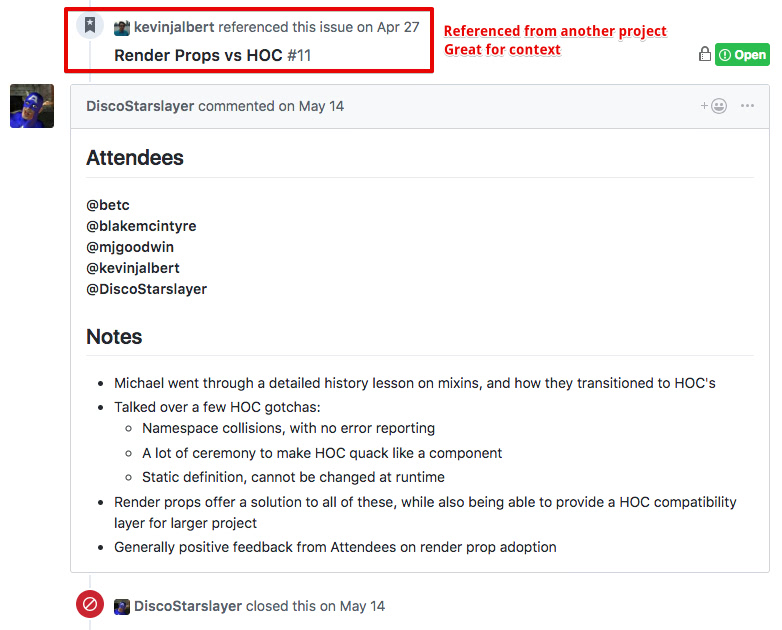 To increase transparency and engagement, we are using the GitHub + Slack integration. This allows us to have events in our video-club repository to be pushed to our #video-club Slack channel.

When someone adds a new video, the issue’s content (following the template) lets everyone know of a new video they could vote on: 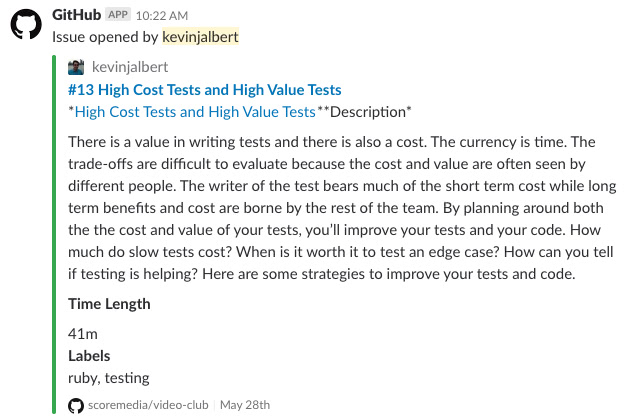 We use Slack’s channel reminders to ping the room to ensuring that votes are cast prior to the time we’ll watch a video. In addition, we announce a bit before what video we will watch based on the sorting of votes: 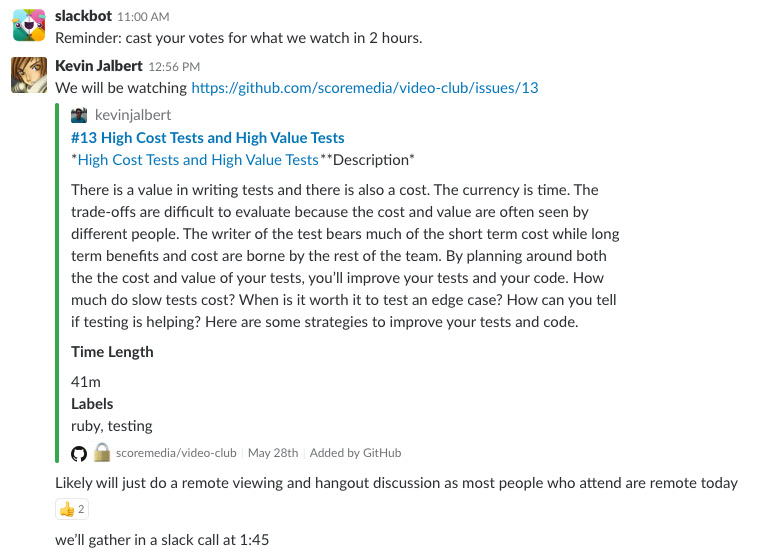 Discussion notes and comments are pushed through the channel to help surface further comments: 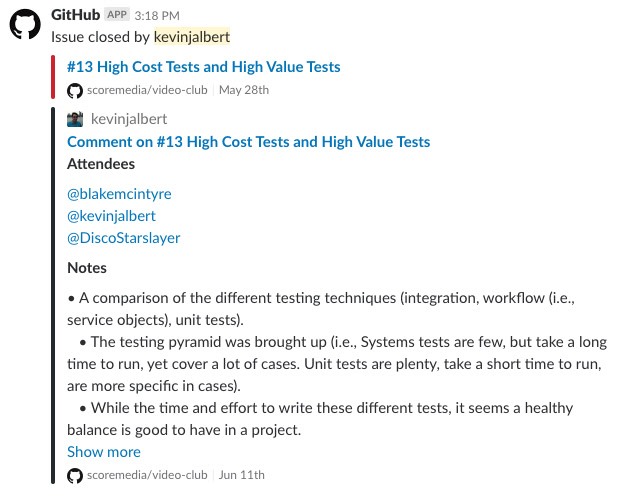 So, are you are psyched to start a video club in your workplace? Now, how do you sell the idea to your boss and peers? You are trying to take 60~ minutes every week or so to watch videos… it doesn’t sound like a good use of work time. Again, the whole point of this is to improve yourself and that these changes will be reflected in the work you do (i.e., knowing better practices and tools).

There are different ways to go about starting a video club, and honestly, it could be as straightforward as asking your boss and peers. I personally think if you can embody the change, it is an easier sell to the organization and your direct manager. First thing I would do is personally find a set of high-quality videos from a conference relevant to your domain (i.e., could even be old ones). Put these out in the open as great material that everyone should watch at some point (which shouldn’t be a stretch from the truth). Suggest a brown bag lunch event, everyone brings their lunch (or buys it) and watches the video during their lunch. Encourage discussion and see if there are any takeaways that might be directly related to the work at hand. Then, eventually, you start to transition to an organizational model (i.e., GitHub) and getting participation from your peers by suggesting videos.

This is a cultural shift you are trying to create, therefore it could be slow. I believe the end goal is to move away from the brown bag lunch and instead to a dedicated meeting time so that the video club isn’t taking up everyone’s personal time at lunch. I’ve seen various attendees drop off due to external lunch plans. Hopefully, a higher attendance can be achieved if it’s a normal meeting time. Overall, I would say either you’ll get your manager/organization to buy into the idea, or you will be stuck doing brown bag lunches. In either case, you will be improving and investing in yourself.